Once Upon A Time In The Jungle...

She was seventeen years old and she fought with her mom a lot and so it came to pass that Tammy ran off and moved in with her drug dealer boyfriend. And this is where the police found her after the drug dealer's rivals broke into the house and started shooting. They didn't even know who Tammy was, nor did they care. She died to make a point; to punctuate a sentence. And, much as I'd like to tell you this is a scene from Concrete Jungle, the comic book this essay was originally published in, the truth is Tammy, her real name, was a friend of mine. A nice girl from a nice neighborhood who lived in a house on a nice, suburban street and who had a mom and a dad and a cat and a station wagon. She wasn't Shareeka the Jheri Curl Reefer Queen, cracked out and staggering down Fulton Street mangling Busta Rhymes tunes. She was third from the left in the photo I took when our team won the flag at summer camp in 1974. She was Nancy's best friend and, though Nancy was Lucy Van Pelt to my Charlie Brown, Tammy was always kind to me, always my bud. Rustling around somewhere in Priest's Big Bag Of Regrets is the fact I never tried to be more than a friend to Tammy, as though decisions we make could actually stay the hand of an often perplexing God.

If you've never had a .45 automatic aimed at you in anger, you're really missing something. It looks like the biggest, blackest, meanest piece of metal ever created by man, and you suddenly move somewhere to the right of yourself and become a casual observer; a lowly extra in the film of your own life's story. You want Tom Cruise, but you get Jon Lovitz. You become Jon Lovitz as frame after boring frame of your life clicks by while the guy holding the gun plays keep-away with your dignity.

I grew up in daily mortal fear and with an acute awareness of where I could and could not go, the difference between the two being as little as a city block. I’d wake up to the thunder of jungle drums: idiots who’d literally point giant speakers out of their windows and start blasting what would later become known as Hip-Hop music from their homes in a kind of jungle warfare. It was tribal: the precious little dignity these young boys had centered around their material wealth or the illusion thereof created by who had the loudest sound system. These boys filled their days hanging out on stoops, hustling for beer and reefer money, playing basketball, and telling lies about sex. You could tell the guys who were actually having sex from the liars because the guys actually having sex usually left the jungle because they got some stupid girl knocked up, just as my sister, a stupid jungle girl, got herself knocked up. Like we didn’t already have enough problems. There wasn’t a huge distinction between life in the jungle and life in the yard at Rikers Island. All we had was time and far too much of it.

I was terrorized, daily, first and foremost by my own sister, who escalated sibling rivalry into Josef Mengele-level masochism and who routinely encouraged and joined in with the neighborhood bullies who beat and terrorized me just as she beat and terrorized me. For three consecutive years I never once came in alone through the front door of my own house, but went out the back and jumped over neighbors' fences to avoid bad guys and worse guys. I was afraid to be on the streets, I wasn’t safe at home because my sister would routinely invite the streets inside. I mean, I’d come home and find the jungle in my house, waiting for me, my idiot sister serving these terrorists who beat me, who robbed our house, snacks and entertaining them. I spent the majority of my childhood wishing to be away from these people I lived with. That was my only goal in life: Get Away From Here. Get Away From Them. I was a little kid. Their job was to protect me. Neither ever did. I knew, maybe as early as ten years old, I was completely on my own. 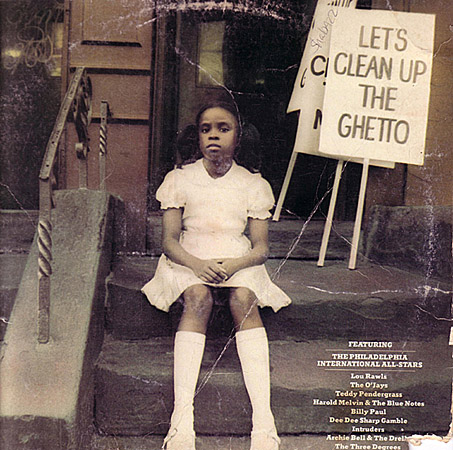 In the jungle you look no one directly in the eye.

You practice invisibility, and the best days are the ones that pass without incident. There is a casual acceptance among even the youngest jungle kids that death could come literally at any moment, and this acceptance becomes license to define their own morality based on consequence and circumstance.

Mine was a world of bad guys and worse guys, and no matter how hard I prayed for Superman or Jesus to come and save me, neither ever did. My father, whom I have never met, lived in the same borough of the same city but allowed us to suffer winters without heat and weeks without food. Mom used to make what I called her famous “Five Day Soup,” a concoction of whatever was lying around that actually wasn’t bad the first two or three days you ate it. I kept looking for the man with the white hat or the man on the white horse to ride to the rescue, but the reality was my mother, sister and I standing in waist-high snow waiting for a bus that wasn't coming.

I could easily have become Elijah Book or Terry Smalls or Freedom "Mayor Bob" Mandela—main characters from The Concrete Jungle, a series torpedoed by Acclaim Comics’ abrupt demise in 1998. In some ways, I am all of them. As a writer all I do is report what I've seen and what I know to be true in some pathetic attempt at self-healing. Jungle, a cynical, dark urban legend, was born out of a childhood of constant anxiety, a childhood lacking either safety or security, its joy and rage and tears and unanswered questions and all that lack of closure trotted out in metaphors of masked goats and so forth.

Concrete Jungle is an urban fable about bad guys and worse guys— people moving through the jungle in herds of collective self-interest. Political activist/huckster Terry Smalls is visited by an African mystic who informs him he is heir to a noble legacy. Smalls' conversion puts him at odds with a massive wheel of corruption, the self-defining morality of the urban jungle, of which Tammy Rogers’ unsolved murder is the center hub. Like building a Taco Bell in the Veldt, obtaining justice for Tammy will be a shock to the jungle's eco system. Smalls has to struggle with both his own moral weakness and the question of whether the re-setting of one man's moral compass is worth the destruction of almost every life he touches— starting with his own.

As with my actual life, Concrete Jungle is full of evil people who do wonderfully noble things and good people who benignly incorporate some level of hypocrisy and corruption. With people who love without sacrifice. It is ruthlessly, giddily cynical with a dash of hope tossed in, hope being the most invented part of the piece. It’s got crime and sex and politics and ancient mysticism and modern religion, with heaping doses of black humor and wrenching terror. And, threaded through the complex layers, it's got what I know to be true. Just a little piece of it. Maybe that's enough.

Part of the many complex reasons my marriage failed was my wife failing to convince me to move back there. We lived in New Jersey at the time but her family still lived in New York.  Moving closer to "home" was the farthest thing from my mind. I have terrible memories of growing up, of the old neighborhood and the old faces. Once my mother and grandmother moved to Florida, I no longer had any reason whatsoever to go there, and it's been at least fifteen years since I have. This was something I could never get her to understand: I wasn't being selfish, this was about survival. If I moved back there, I'd lose my mind.

I no longer live in the jungle. I live in the foothills of the Rocky Mountains, in a town where crime is pretty low, perhaps because the corner drug store sells pistols and everybody's got a gun rack on their Toyota 1-Ton. Maybe I just traded one jungle in for another.

Related: The Busboy
Michael Jackson & Joe Paterno
The Herman Cain Minstrel Show
If Obama Weren't Black
My Beef With BET
The Myth of Bipartisanship
Why I Stopped Writing Comics
Happiness & How To Avoid It
Wave This Flag Or Else 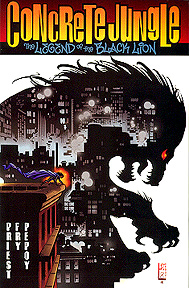 Concrete Jungle may have been a first: a series that was cancelled before the first issue shipped. Artist James Fry and I were well into our fourth issue when we got word that Acclaim Entertainment, the corporate parent of Acclaim Comics, was pulling the plug on the comic book division. Editor In Chief Fabian Nicieza made the calls himself, personally delivering the bad news that Acclaim, the most fun and, for my money, the fairest and most decent publisher in the game, was no more.

There were a lot of reasons for the decision, most of them involving a simple economic reality: Valiant comics were not welcome in a great number of comics shops across America. Valiant, in previous incarnations, had made some bad decisions and cost some retailers a lot of money. Even though the newly FabNicized Acclaim Comics had little to do with previous incarnations, the resentment continued to linger among many retailers. Acclaim simply could not penetrate the market and, sadly, the line ended up losing money. I took it pretty hard. Comics is often a cutthroat business not always run by the brightest or friendliest of people. Acclaim was a blast; a place to truly explore your creativity. We had a great relationship with the company, which also published the popular Quantum & Woody, and the company's demise truly saddened me.

Unfortunately, Concrete Jungle #1 had already shipped to retailers. There would be no #2. At this writing, there are no plans for a #2. In a gesture to the retailers who did support Acclaim, the company released the shipment of Jungle #1 for free, crediting all retailer accounts for the copies shipped. This was, in fact, a free comic book, and many retailers literally gave the book away (of course, many didn't).

For us, Concrete Jungle was a labor of cynical joy. It was a series about bad guys and worse guys, a warped and demented view of life in Brooklyn New York among politicians and cops. I was dizzy with glee writing it, and artist James Fry who lived in Brooklyn and is the son of a NY cop) delivered the goods in spades. We were convinced Concrete Jungle would be a milestone in our career: our ticket out of obscurity and onto the A-List of sought-after talent.

Then we were cancelled before we even got started. Which, actually, is the story of my life. This should be engraved on my tombstone.

The series opened with eight splash pages, much to the horror of much of Acclaim's editorial staff. The splash pages and accompanying essays were highly effective in setting the stage for Jungle, though, and once the book was completed, many of these doubters applauded our decision to open in this dramatic way. I've included that opening sequence here, as well as some other excerpts from the only existing issue of what would have been a very cool series.